Another good turn out for a Boxing Day and a strong squad from both Blaydon and Ryton, in addition to strong representation from the Bricks current Squad, we had some guests, from the Development Jack Inglis and Lewis Hill, both who had also played the previous week and some past Bricks; Bum Bum, Sean Pyle, Texas and Stu Trellor.
.
Highs and higher from the game:

• Before the game started we got to the bottom of the magic boots from Sunderland.. remember last week’s report read: Another Sunderland break threatened the Blaydon try line but was snuffed out by Keith W who was covering back at speed with no one else near to support (remember the magic boots? Keith can’t run that fast – so they must have been magic!). The boots are mine (Bruce) not used for some time, but it does explain the speed, etc.….. The changing room were gutted to find out who’s boots there were. :-) had to make the match report.
• So as per usual Boxing Day it all started with cry offs in the morning with truthful excuses, you know who you are
• Followed by the no-shows in the changing rooms, we lost both scrumhalfs within 3 minutes, Owen had been ill, Stracks forgot to mention this, James M, who liked the game to say available, then claimed he didn’t know the game was on, herding cats, Sean Pyle was offered up by Bum Bum and Sean hesitated when looking for an excuse not to play there and was installed as scrumhalf.
1st Half
• Sean played well, first scrum, great scrum half kick took the games 40 yards down the pitch ad he was a threat all game.
• Tackling from Sean, Savs, Damien A and Dan T sniffed out every Ryton move, just as well as our two 7s (Stu B and Lowsey) were off walking reindeers
• Pack played great, big yards made by GB, Tom, Windy, Harry, Stracks and Jack, Ian and Steve Kane were all over the park
• Few missed tackles kept Ryton in the game in what was a very evenly fought competition
• First try to Bricks, Sean broke out of our the 22 Goggle took it on and put into touch just outside of the Ryton 22, Ryton lost the line out, Harry secured it, Sean to Savs, to Dan T broke through and Savs back on hand to finish off a great try, Sean added the conversion
• Wind was playing havoc with the game, Ryton kicked for touch, wrong direction and too high and ball turn round and was caught by GB, YES! GB ……
• Phil R wasn’t having much fun, it wasn’t a good day for fullbacks, with ball moving in the air and coming down in strange places, team played well and defended well with all sorts of people like Harry, Dan T, Steve K etc, getting back to did up loose ball, the best one was well secured by Windy, but with a slow motion tree fell approach to getting down on the ball,, maybe his new yellow boots, as shown on Facebook will change all that …… He did take a bit of stick for putting on the 7 shirt, but to be fair our back row took it to Ryton and played well. 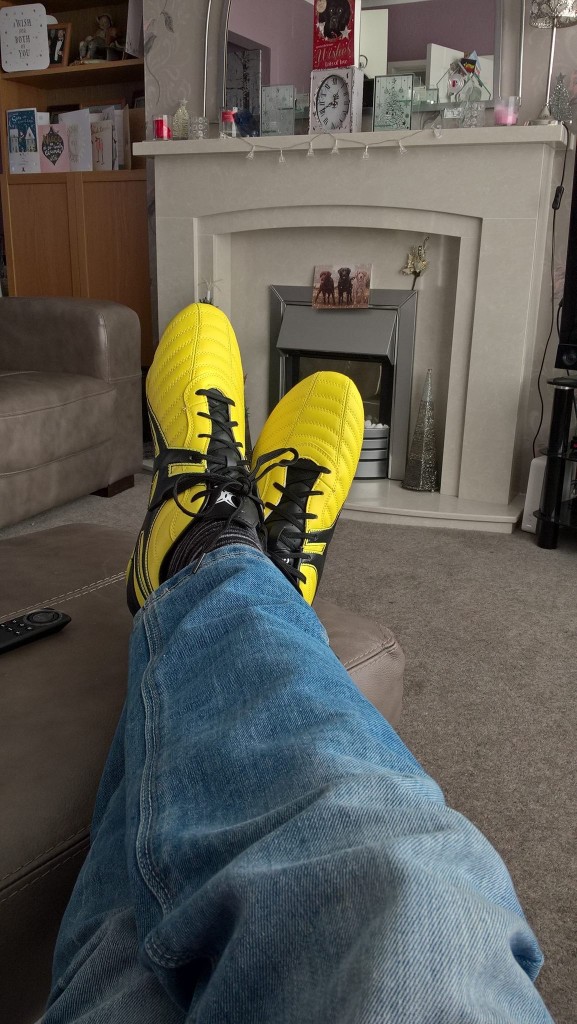 • Great defence from the forwards keeping Ryton out, time and time again.
• Ryton full back fell foul of the wind and managed to shin a ball straight into Dan T arms who thanked him and ran the ball in
• Ryton cleared poorly and ball went straight to Phil R on the far touchline, a little further out, 40 yds or so, but with a run into the corner, our view is Phil figured out the distance and knocked it on, to save running that far
2nd Half
• Quite a few changes at half time, meant fresh legs but things got a bit disjointed for a while, but pack made good yards with GB, Tom, Keith, Stu T, Bum Bum, Stacks, Harry and Steve Kane still getting round the park
• Steve Kane complained about not getting enough mentions in the match report, so hopefully he will be happy now…….
• More great defence from the forwards keeping Ryton out, Keith secured a turnover, but at the next line out he thro the ball to Ryton Scrumhalf, obviously it was the wind’s fault

• Sean made a good break up the narrow side and a good set of interplay with Savs, Bum Bum, Dan and Texas breaks down just inside the Ryton 22
• Keith achieved another turnover, illegally I may add, bit like tumbleweed rolling over the top of a ruck, but he got away with it, I think the execution confused our officials, or maybe Mark’s shorts were just too tight and his focus wavered
• Texas confused the Ryton backs and back row by running the ball from 20 yards out, untouched to score fro 7 more points.
• Ryton seemed to get bigger and quicker, but with the wind never really allowed them to use their speed advantage as move after move resulted in attempting passes that were too long for the conditions
• So in true spirit of getting us in the bad books, we slated the referees in the bar after the game, knowing there was a second game to come with them, Andy bitting straight away, after being accused of being more biased against Bricks than Mark was, and Mark taking some stick or his shorts, labelled as sponsored by Anne Summers …… What could go wrong in the follow on game, Andy was practicing pirouette moves for delivering yellow cards, he was really girlie for a big lad….. (may as well get hung for a sheep, as a lamb, as the old saying goes)
• Few beers with the guys from Ryton and off to the club to drink through the evening and replay the game’s events and a really good night in the bar at the club.
So round 2 of the festive exchange on Sat 31st, New Year’s Eve, at Blaydon, KO at 1pm again to allow those who plan to, to get off to functions/events planned for New Year and for others to drink copious amounts of Beer/Moretti again… after the game.
Team:
1. GB
2. Ian B (Keith)
3. Tom
4. Jack I (Stu T)
5. Steve K
6. Stracks
7. Windy (Bum Bum)
8. Harry
9. Sean P
10. Savs (Texas)
11. Craig B ( Mickey Bell)
12. Dan T
13. Damien A (Savs)
14. Lewis (Dingley 2)
15. Phil R (Lewis)