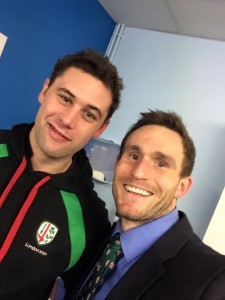 With Fenby in good form on the wing for the Exiles, he was joined at the Madejski Stadium by former Blaydon full back Smith, who was unveiled as the new London Irish match day doctor.

Let’s hope Fenners doesn’t have to spend too much time with the doc but we wish them both the best of luck.