A warm welcome to one and all in this our last home game of this season.

I am sure you will agree we have seen some magnificent tries and it has been a real boost to win so many games after two successive relegations. Congratulations to all those players who have entertained us so well and lets hope it continues to the very end of the season.

In total we have scored 132 tries including last weekend at Kendal. Of these 78 were from the backs and 51 from the forwards with 1 penalty try.

The leading try scorers( as provided by John Brennan) are as follows;

By comparison Morgan Passman of Tynedale leads National 2 North with 28, and Craig Holland of Chinnor with 22 in National 1.

Today we welcome Kirkby Lonsdale and their supporters and I know we will give them the courtesy of a fine welcome as they did when we went there in early December where we played in incessant rain throughout. Its all very well celebrating our past performances but we will have to again be at our best to overcome difficult opposition today who have beaten Wirral and Billingham in the last 3 weeks

Much can happen in all leagues in terms of promotion and relegation before the end of the season and it will be fascinating to see who goes up and who goes down.

I expect a number oy you may wish to go to the Vale of Lune next week but there will not be additional places on the Bus, and thus those who do wish to attend, and I hope it is as many as possible, must make their own transport arrangements.

Have a good summer !
Bill Locke

I am grateful to Jim Huxley for the following helpful synopsis of the present state of play on Promotion Run In:  https://www.blaydonrfc.co.uk/promotion-run-in/ 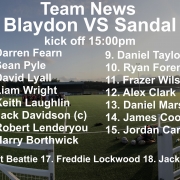 From the Touchline - Sandal Game

Saturday 6th April – From the Director’s Chair
Scroll to top