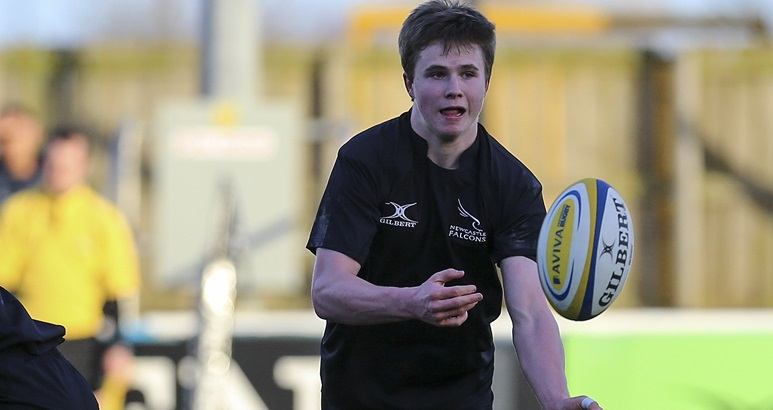 Newcastle Falcons are pleased to announce 17 year old scrum half Ruaridh Dawson will graduate to the club’s senior academy structure in 2015/16 after an impressive season with the academy’s Under 18 set up.

Dawson, who attends Newcastle School for Boys and plays club rugby with Blaydon joined the Falcons Academy towards the end of season 2014/15 after impressing for club, school and county.

He started playing the game at the age of nine at school and 15 at Blaydon after playing mainly football as a youngster and in recent seasons he has featured in Scotland’s youth set up. Yesterday, Ruaridh was selected in the England Under 18 Clubs and Schools squad. Academy Manager Mark Laycock has been impressed with what he has seen and is looking forward to seeing what Dawson can achieve.

“Ruaridh has been one of the stand out players in this year’s Under 18 crop and has done well in all of the games so we are keen to see how he progresses as part of the senior academy set up.”

“He will undergo a full pre season with the senior squad this summer and then will be aiming to get involved with the A Team alongside the games he will play for his dual registered club Blaydon, so he should get a good amount of exposure to competitive rugby over the season.”

Dawson said: “I didn’t really have the love of football after playing that for a while so I picked up rugby at school when I was nine.”

“I enjoyed it and Mr. Hogarth, my PE teacher, was coaching at Blaydon and encouraged me to go down to that club. I’m pleased I did because I really liked it there with the club being really friendly.”

“It will be a new experience and working alongside some of the Falcons first team squad will be quite a shock to the system, but I am looking forward to it.”

The original article can be found on the Newcastle Falcons website: http://www.newcastlefalcons.co.uk/news/story/dawson-joins-senior-academy-for-201516

It is with sadness that the club announce the loss of Dennis Jewitt.
Scroll to top