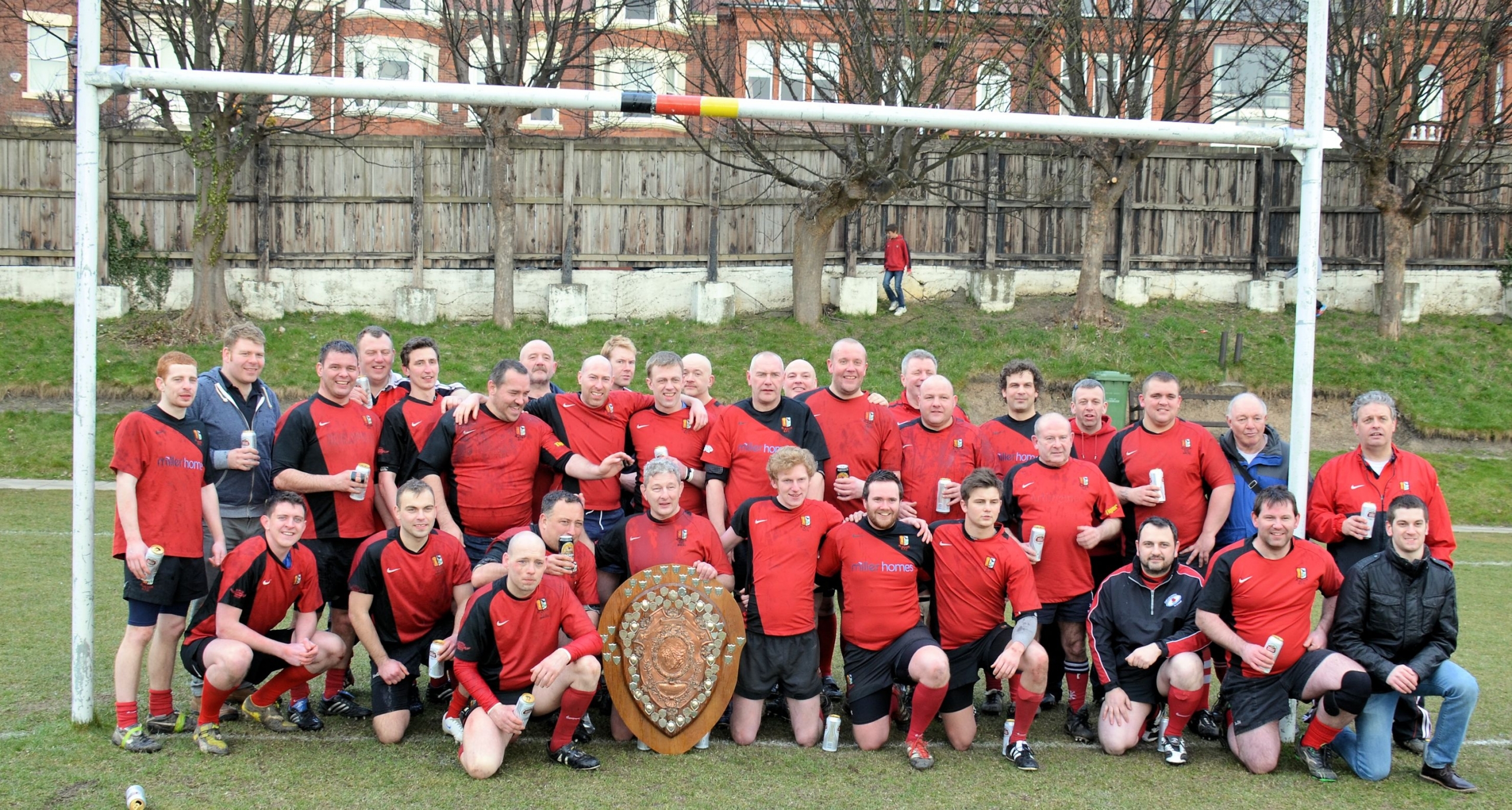 Scorers:
Trys: Coatesy, Joe 2, Chris Collings 2, Harry, Nick Coates, Savs, Thacks, Chester
Conv. Joe 3, Thacks 2
Blaydon 60, South Tyneside College 0
The long awaited Match report from Davy Hall:
The sun always shines at Ashbrooke when the Bricks visit for a cup final and Saturday afternoonwas no exception. Bathed in glorious sun the Bricks saved their best performance of the season for the most important game.
From the early stages of the game the result never like in doubt. A dominant set of forwards time and time again giving the backs an excellent platform to play some real champagne rugby.
After 10 minutes Chris Coates opened the scoring with a darting run from just outside South Tyneside twenty two with Joe converting to make it 7-0. A marvellous start for myself as I’d picked him out of the sweep. Needless to say this resulted in accusations of skulduggery as I had ran the sweep and as such I have graciously donated to a fund to have Janette Snowdons larynx removed.
Minutes later following a thumping tackle and turn over by Marge, quick ball was thrown to the backs and Chester found Joe who beat his man superbly to score in the corner 12-0.
From the ensuing kick off Brett caught cleanly and charged 50 yards up the pitch and once agin lightening quick ball from the backs found Chris Collins who finished to make it 17-0.
With only half an hour gone the game looked to be won with Blaydon well in control and when Nick Coates kicked deep into South Tynesides twenty two and after a couple of nightmare bounces Goggle collected and Chris Collins went over for the score. Joe converted to make it 24-0.
It was at this point the reporting went awry, I did make notes in my phone but must have accidentally deleted them with my fat sausage fingers.
So the rest of the game in summary from what I’ve been told, try for Harry, try from Surrey, some other trys. I recall Savs beating 5-6 players and scoring a lovely try and Thacks kicking the conversion.
All the allowed substitutions were used in the second half but unfortunately there was no complaining from anyone. Did I ever mention the time I got dropped for the final………..

Anyway, official final score was 60-0. No disrespect to South Tyneside who stuck in for the full 80 minutes but this was one of the easiest victories of the season. The game plan, unlike the semi final against Gateshead was followed to the letter and that was reflected in the score line and ease of victory.Other point of note:

South Tyneside number 7 with big hit on Harry as PC shouted “Harry’s down at Bechers Brook!”

Harry getting SPLATTED by Butterbean.

Finners on the charge resulting in him landing on the South Tyneside number 5 who thankfully has just this morning been brought out of his coma.

And of course no cup final day would be complete with seeing an elderly, overweight, drunken, hairy, naked midget being squashed into a luggage rack on a coach – I’m sure we’ll all be looking forward to seeing that again next April, long live Stag!