Blaydon’s prospects of retaining their Division Two North status for next season took a turn for the worse with this losing encounter against South Leicester from which they gained only a try scoring bonus point.
Just after the half-time break they led 22-24 and deep into the second period were only 2 points adrift at 36-34 but ultimately were let down by some indifferent tackling and a failure to cope with 2 outstanding individual performances from the home team.
Rickie Aley the South Leicester fly-half was a commanding presence throughout, constantly driving Blaydon back with mighty clearances, and on the left wing Myles Bean used his tremendous pace to run in 5 tries.
The home side took an early lead with the first of Bean’s efforts and an Aley conversion and then a penalty but from a Blaydon counter-attack hooker Cameron Bell crossed from a line-out drive and Tom Catterick added the extras.
Bean went over twice more but as the interval approached Blaydon scored again when David Kilpatrick stormed into the 22 in typical style and another Catterick conversion made it 22-17 at the interval.
South Leicester lost possession of the re-start kick for Blaydon to ship it out to Dan Marshall who scooted clear from half-way, Catterick converting, and the visitors were in front.
Bean and then Matt Cook the other winger hit back for the home side only to see Harry Borthwick grab Blaydon’s bonus point try in similar style to the earlier Kilpatrick effort.
That completed the Blaydon scoring but in the closing stages Bean was away again and then a hotly disputed penalty try put the issue beyond doubt, leaving the Crow trees side facing a vital last game of the season in 7 days time.
John Brennan
http://www.blaydonrfc.co.uk/wp-content/uploads/2018/03/7A9CBBB1-A6F4-4F83-9C70-A7CEDC54DFD6.jpeg 353 960 bruce100 http://www.blaydonrfc.co.uk/wp-content/uploads/2018/06/blaydon-rugby-club-logo.png bruce1002018-04-22 07:56:022018-07-16 20:41:18South Leicester 48 Blaydon 34 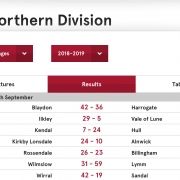 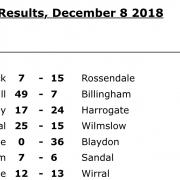 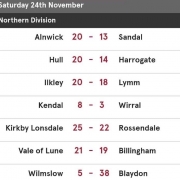