A very warm welcome to our guests Kendal today. It is some year’s since we last played them and indeed this is our 1st game against Cumbrian opposition this season as we travel to Kirkby Lonsdale next weekend.
Both Clubs take pride in their former player Mark Wilson and his recent sterling performances for England. Its great to see national Rugby writers slowly having to appreciate that he should have been playing for England earlier and won more caps despite “only” playing for Newcastle Falcons
Kendal are an ambitious team who have benefitted from an input of cash which has enabled them to complete a fine Clubhouse that we look forward to visiting at the end of March. They are not having the best of seasons so far being placed 12th in the League with 3 wins, but this includes a fine home win over Wirral 8-3 last weekend which they will be hoping inspires them today.
We travelled to Wilmslow last week with a few absentees but thanks to a fine hattrick by Jack Appleton won 38-5 in a comfortable manner. There will be no room for complacency today however and we expect another hard fought game if we are to progress up the League towards Billingham and Hull.
Last week’s shock was Vale of Lune beating Billingham for their 1st victory which again confirms that their are no certainties in this League. Meanwhile our former player Harry Bate continues to shine for Blackheath who now lead National !. Could they make the championship ?
Glad to be on a decent pitch today after all the rain in recent days. Lets hope for more running rugby.
See you in two weeks at the Xmas Lunch and at the following Alnwick game. Make an effort to get down and bring a friend with you 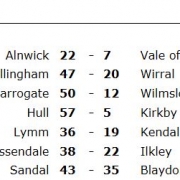 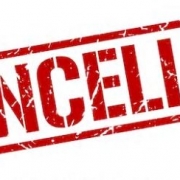 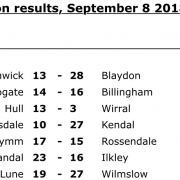 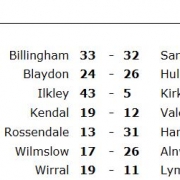 From the Director’s Chair – Blaydon v Kendal
Scroll to top